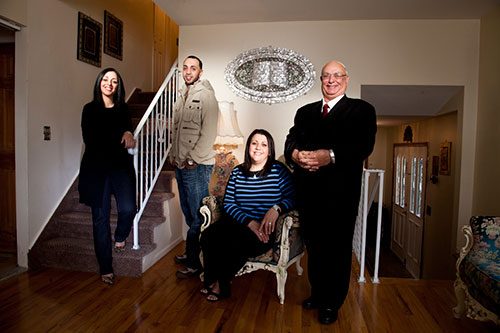 Awni Abuhadba came to the United States to improve his English-language skills. He stayed, he says, “to take his chance at the American dream.”

Following in the footsteps of an older brother, Awni Abuhadba, now 68, arrived in America in 1971 from his native Palestine after graduating from Birzeit University in Ramallah. Nearly 40 years later, he is one of the best-known and most influential members of the large Arab-American community of Paterson, where he has held the appointed position of deputy mayor since 2002.

Paterson, long a magnet for immigrant groups, began attracting new arrivals from Arab lands as early as the 1890s. Today, those of Arab descent—mainly Lebanese, Jordanian, Syrian, Palestinian, and Moroccan—account for approximately 15 to 20 percent of the city’s 145,000 residents.

Like many Paterson newcomers, Awni Abuhadba initially found work in a textile mill. Hoping for more, he studied business and political science at Passaic County Community College and William Paterson University, and later took classes in the insurance business. His big break came when an Italian-American friend and mentor sold Awni Abuhadba his insurance agency with nothing more than a handshake as collateral.

At 26, he briefly returned to his homeland to find a bride. There, his uncle’s wife introduced him to Mayson, an ebullient woman from Bethlehem. “Not exactly a traditional arranged marriage,” says Abu Hadba. “But you could say it was a really good referral.” Together they have raised five children; two are married with children of their own. Following Palestinian tradition, the other three—all in their twenties—still live at home with Awni and Mayson.

Although they cling to their ethnic traditions, Awni Abuhadba says he and his wife chose to raise their family in America “because of the opportunity of a better life, health, education, safety, stability, financial opportunities, and freedom of speech.”

It was not until 1984 that Awni Abuhadba really began to understand how to exercise some of America’s freedoms. He recalls the moment vividly. “There was a funeral at the United Islamic Center on Knickerbocker Avenue. Hundreds of cars lining the street were getting ticketed. Friends and family were complaining. But they didn’t know what to do. So I went to Frank Graves, the mayor at the time, and I said, ‘What are you doing? This is a funeral! Can’t you let us park here?’ And he turned to me and said, ‘You may have 100 cars here, but your numbers don’t count. You see that house over there? They count. They have four votes. You are 100 cars, but you guys are 100 zeros.’”

For some it was a funeral; for Awni Abuhadba it was an awakening.

He and others began to organize the Arab-American citizens of South Paterson with the aim of gaining political visibility. Awni Abuhadba made a run for the city council in 1984, but lost. After that experience he decided he would rather try to make things happen as a community organizer. “It’s easy to get involved,” he says. “You can create change and decide a simple thing that makes your life better. America is the greatest country for community involvement.”

Awni Abuhadba was a natural when it came to courting the city’s leaders. He remembers stunning the Arab community during one election campaign when he walked up the street with longtime Mayor Graves, a Democrat, and then came back the other way with the Republican sheriff, Ed Englehardt.

Today, political candidates hoping for votes in Paterson routinely seek his support. In addition to serving as Paterson’s deputy mayor, a largely ceremonial position, he is involved in national issues as a board member of the New Jersey chapters of the Arab American Institute and the Anti-Discrimination Committee.

The events of September 11, 2001, presented a unique challenge to Paterson’s Arab community. Soon afterward, reports emerged that several of the 9/11 hijackers had been living in Paterson and nearby Wayne in the months leading up to the attacks. The news generated suspicion in the surrounding non-Arab communities. Arab retailers felt a sharp slowdown of business, and all Arabs experienced a palpable chill.

Awni Abuhadba rejects any notion that his community supported the attackers. “Those terrorists were not from our town,” he says. “There were several Arabs found in that apartment in Paterson, sure, but they didn’t live here. They were only here for a few months. Nobody knew who they were. The Arabs here are Americans like anybody else. Our children go to school just like anybody else. We dismiss their evil. They are not human. Three hundred Muslims died that day.”

The good news, he says, is that the situation has improved with time. Business is back on track, and even though there have been terror alerts since 9/11, these days they do not seem to affect the status quo in Paterson.

Although he is an important community leader in Paterson and runs a bail-bond business in the city with one of his sons, Awni Abuhadba long ago followed the pattern of other immigrant groups and moved his family to nearby Wayne. Living in this suburban melting pot is highly attractive to Mayson, now 59, and a jean-clad, stay-at-home American mom.

On her deck, overlooking the sprawling backyard, she points out the surrounding houses. “It’s like the U.N. here. We are so lucky,” she says. “This is my Polish neighbor. Oh, what a wonderful woman. How many times she helped me when the kids were sick. Cooked for me. We watched each other’s kids. On this side is my Jewish neighbor, and they have a couple of kids too. When they were little, we used to say our street had the answer to the peace process.

“Next door,” she continues, “they are Italian. All the kids grew up together. It’s all I’ve ever known since I came here when I was 15 with my husband. I love it.”